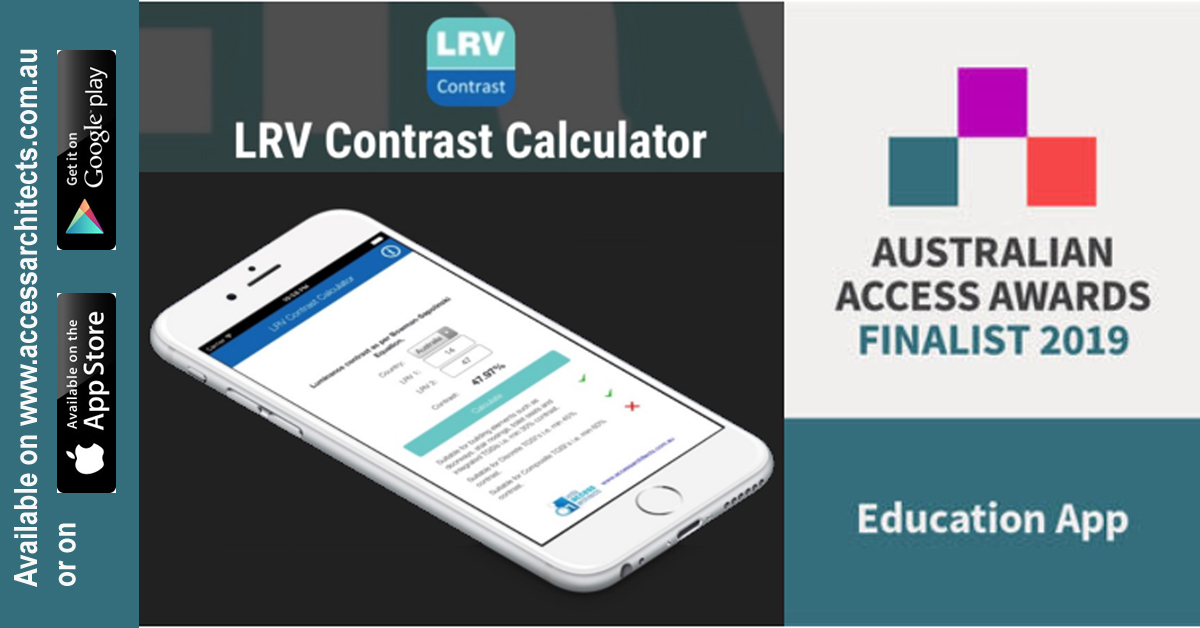 'LRV Contrast' App developed by Vista Access Architects and BEZAPPS for calculating LRV (Luminance Reflectance Value) Contrast has just been judged as a finalist in the 2019 Australian Access Awards for the Educational App of the year category.

The LRV / Luminance Contrast Calculator is an easy to use educational tool, available in an online version on our website at https://www.accessarchitects.com.au/calculators and also available to download for free at the AppStore link for iphones / Apple devices and GooglePlay link for Android devices.

The majority of people who are blind or vision impaired have some vision. The purpose of the LRV Contrast App is to assist with selection of colours for building elements to enhance access to information and navigation of the built environment for people with vision impairment.

The LRV Contrast App can calculate the luminance contrast based on the LRV of a colour which is easily available from all colour/paint suppliers or on paint samples / fandecks. While the surface or paint finish also plays a role in the Luminance Contrast, it is anticipated that this App will assist with colour selections, at the design stage itself and assist as an educational tool for designers and builders.

The App has been designed to check if compliance could be met with minimum contrast requirements of building elements such as doorways, stairway nosing, toilet seats, signage and different types of Tactile Ground Surface Indicators as mandated under the NCC (Australian National Consruction Code). The formula is based on the Bowman-Sapolinski Equation as required by the NCC (National Construction Code) and Australian Standards AS1428.

It also has a feature to check for compliance with American DDA (Americans with Disabilities Act) LRV requirements.